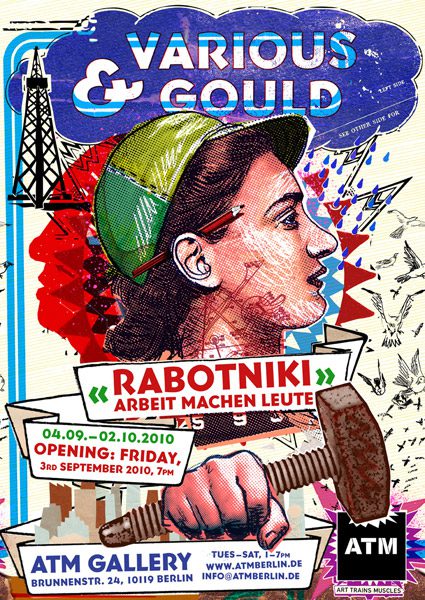 When the hard-working Berlin artist duo Various & Gould come back from their construction site, they have calluses on their hands and a whistle on their lips. Dust has penetrated to the furthest folds of their bodies and has mixed with sweat to form viscous glue. Their sunburnt skin glows almost as brightly as the colourful, wildly assembled reflector uniforms. The well-deserved after-work beer is quickly opened with the teeth and a place is sought to play cards.

Work – what is that supposed to be? Hardly anyone likes it, but it seems much worse without it.

With their current series of paintings, posters, material and silkscreen collages, Various & Gould embark on a journey into the strange world of work. In the process, through a hole in the construction fence, they have discovered the cosmos of figures known as the “Rabotniki”, whose name derives from the Russian word for work. This cheeky and colourful troupe of cobblers and knife- and fork-lifters, of shovel-wheel drivers and wrecking-bulb collectors seems to have fallen out of time and yet is far ahead of us in one respect. While many of us drag ourselves to an unloved job every day in order to be able to afford the life we have left, the Rabotniki are completely absorbed in what they do. They work just to work, and sometimes dig a hole only to fill it up again.

The boundaries between work and play become blurred when the Rabotniki perform their Dadaist construction workers’ ballet on the scaffolding boards high above the city. Legs fly and heads change hands. If the hammer is too heavy, a stronger arm is needed. If the feet are tired, they are thrown into the air and three new ones are screwed on. You almost don’t believe it, but there is hardly a part of the body that you can’t use to get a nail into the wall!

What may look like pure, happy anarchy is always also the unconscious search for balance: Do we do the work, or does the work do us? Are we shaped by it or can we shape it? One might sigh now that work was one of the first subcultures to be commercialised. But what do the categories of “alienation” and “fulfilment” mean to a rabotnik that has just reassembled itself? Work is there to be made!

ATM Gallery cordially invites you to join Various & Gould in doing what is most fun next to work, watching others work! 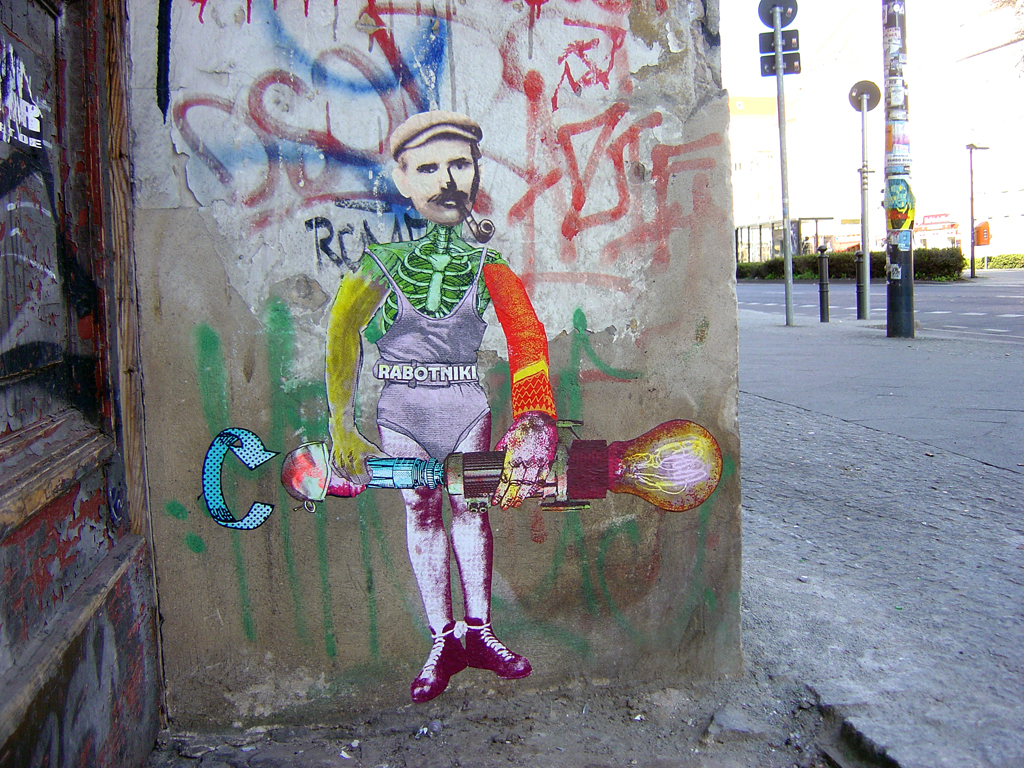 EMESS – ART IS THE SOLUTION
Scroll to top