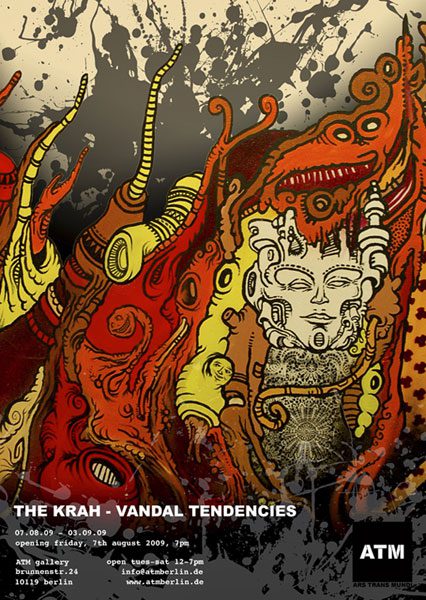 THE KRAH is a decrepit yet talented young man who has wasted most of his youth scribbling on everything and using any medium he could get his hands on.

Brought up in the mediterranean chaos of Europe’s most ancient city, ironicly the one that gave birth to democracy, The KRAH was always fascinated by the urban disorder of his hometown of Athens, Greece where the priests are the richest men and the sunstroke makes the nation think that democracy still exists.

As vandalism was the most fun thing to do, THE KRAH started painting the streets and the subway trains of Athens in 1997, but his graffitis, stickers and posters can also be seen on the streets of a lot of other citys around the world, all over Europe and cities such as Tokyo and Bangok.

After moving to East London The KRAH is still a very active street-artist and if graffiti is about underground freestyle funky visuals in illegal spots, THE KRAH has plenty of them to offer.

On the other hand The KRAH has also exhibited in lots of galleries in London and internationaly in gallerys such as: Black rat Press, the Pure Evil Gallery and Art Rebublic in London or Whinos Gallery Washington and the Vavel International Comics Festival in Athens. He has had group shows alongside artists like Ron English, D-face, Sickboy, Swoon, Elbowtoe, Mode2, and Pure Evil. Additionally he has been one of the artist of Banksy´s latest Can´s Festival in London.

In his first solo show in Berlin THE KRAH will exhibit some of his most recent works which are a combination of graffiti, urban drawing, stencil patterns and his very own characters – a combination that makes his style pretty unique in the world of urban art. 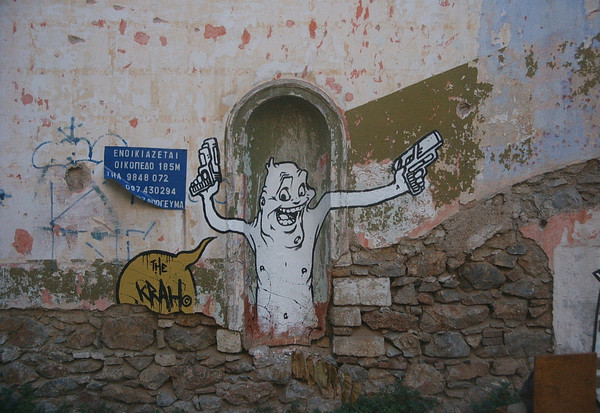 EMESS – What’s the colour of money?
Scroll to top